Enchanting Óbidos is one of Portugal’s most beautiful destinations and one of Europe’s best-preserved medieval villages or walled towns. Everywhere you turn is a postcard view, and that has inevitably made it one of the country’s most visited sites. But tourism hasn’t ruined its authenticity, with around two thousand people still living in its pretty whitewashed houses with gothic doorways, potted plants and bougainvillea, all inside the crenellated walls of an ancient castle. Many of those people still dedicate their lives to the traditional handicrafts and the famous local drink, Ginja de Óbidos, sold on the only real street in town, Rua Direita.

Although the name Óbidos derives from the Latin oppidum, meaning “walled city,” the quaint village dates back to Portugal's Celtic period, and was only later taken over by the Romans in the 1st century AD. They created the Roman city of Eburobrittium, and were followed by the Visigoths and other Germanic tribes in the 5th century. The Moors took it over in the 8th century, and finally Portugal’s first king, Afonso Henriques, conquered it in 1149. It then became property of Portuguese queens until the 1800s.

The walls you see surrounding the picturesque village today were built in the 1300s, and although they were partly damaged in an earthquake in 1755, they were completely restored in the early 20th century, starting in 1910.

Óbidos was actually an important port at one time, but the river silted up in the 16th century. Due to its ties to the royal family, however, it continued to prosper. The fact that it’s only about 80km north from the capital also helped, and today it's a popular day trip from Lisbon. Many travelers also stop by on their way between Lisbon and Porto.


Not only is it one of Europe's best-preserved medieval villages, it’s the best example of a traditional Portuguese village. In 1951 the castle and the entire village were classified as national monuments and, in 2007, it was voted one of the seven wonders of Portugal. It’s also conveniently located just one hour north of Lisbon, making it an easy day trip.

What You Need to Know Before You Go to Óbidos


It’s known as “The Wedding Present Town” - King Dinis and Queen Isabel spent their honeymoon in Obidos in 1282, and the king ended up giving her the entire town as a wedding gift. Portuguese queens then controlled much of what happened in town (until 1834), including the construction of monuments, such as the landmark aqueduct, which Queen Catherine of Austria (who married Portugal’s King João III) had built in the 16th century. Obidos maintains a romantic atmosphere, and couples today often choose to go on carriage rides around the town. The horse-drawn carriages can be found lined up outside the walls, by the main gate, throughout the year.

It was home to one of the world’s most exceptional female artists - Óbidos’ most famous resident was Josefa De Óbidos (sometimes spelled “Josefa D’Óbidos”), a 17th-century artist whose works are found in several of the local churches, as well as in museums around Portugal and even the world, such as the Louvre in Paris. She was born in Seville (Spain) in 1630, to a Portuguese father and Spanish mother, but moved to Óbidos at the age of 4. Her father was a painter, so she started collaborating with him, but ended up being quite a prestigious painter herself. Today she’s regarded as one of Portugal’s greatest artists, and is also quite an exceptional and rare example internationally, as she’s one of the few female painters of the time. Her works have been on display in institutions like the National Museum of Women in the Arts in Washington DC, but it’s in Obidos’ churches and museums that you can see a larger concentration of them. She’s buried in the Church of St. Peter.

It hosts popular festivals throughout the year - Óbidos is the stage of some of Portugal’s most popular festivals, attracting thousands of visitors throughout the year. Those include the Chocolate Festival in the spring, the Medieval Fair in the summer, the Literary Festival in autumn, and the Christmas Village in December. These festivals charge admission, and are especially popular on weekends.

You should avoid the weekends - The best times to visit Óbidos are on weekdays, especially when there’s a festival. Residents of neighboring towns and from Lisbon often head to Óbidos on weekends, joining the many tourists, so the narrow streets become packed, and you may have to wait a while for a table at the restaurants.

How Long Should You Stay in Óbidos?


Óbidos is quite a small place, and can be seen in just one morning or an afternoon. However, we recommend that you don’t rush your visit, and spend an entire day, giving you extra time to relax with a meal, and perhaps visit a museum. Many people also choose to stay overnight, for the experience of sleeping in the castle, but the other charming hotels are also good options, as you get to experience the town in the hours without the crowds of tourists. If you have a car, take the opportunity to visit other major attractions nearby, such as the Buddha Eden Garden, the dinosaur park in Lourinhã, or the beach of the Obidos lagoon.

Where to Go After Óbidos?


If you have a car, consider a stop at the Buddha Eden Garden, which is just 15 minutes away. In about 30 minutes you may also be at the dinosaur park in Lourinhã, or at the beaches by the fishing port of Peniche. Back closer to Lisbon is also the great palace of Mafra, and the beaches and surfing waves of Ericeira.
If you’re visiting Óbidos as a day trip from Lisbon, also don’t forget another trip to the fairytale town of Sintra, or a day by the sea in Cascais.
If you’re stopping by on your way to Porto from Lisbon, you can make further stops in Alcobaça (35 minutes from Óbidos) and Batalha (45 minutes), both home to monumental mostasteries classified as world heritage sites. 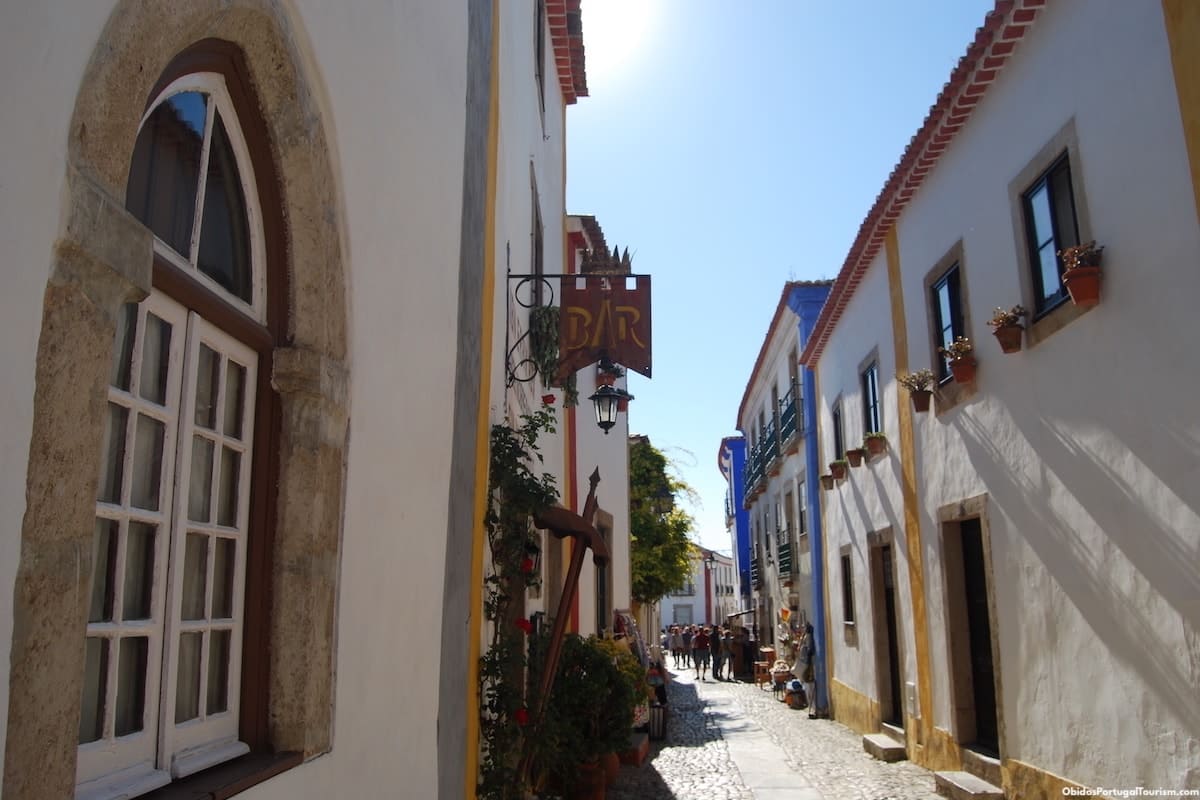 
Everything you need to know about Óbidos and to plan your visit is on this website. It’s completely independent information from travel experts, not sponsored by or associated with any local institution or organization. However, if you still have any questions, pass by the official tourism office, which is located outside the walls, facing the gate and by the main parking lot. It also has a gift shop and often sells tickets for local concerts and events. It usually opens at 9:30am, and closes at 6pm or 7:30pm, depending on the season.