Home > What to See and Do > Pillory

The pillory stands across from Óbidos' main church

Stone columns (or pillories) can be seen in almost every major town in Portugal. They usually stand in front of the town hall, bishop’s palace, cathedral or main church, symbolizing local power and authority. They were used to chain criminals, in a tradition dating back to Roman times. The accused would often be hung naked on the pillory, and locals would throw objects at him or her. These columns became a prominent feature starting in the 1100s, and by the 1500s some were true works of art. The stone columns were often richly carved and decorated, and topped by the Portuguese king’s symbol, an armillary sphere. 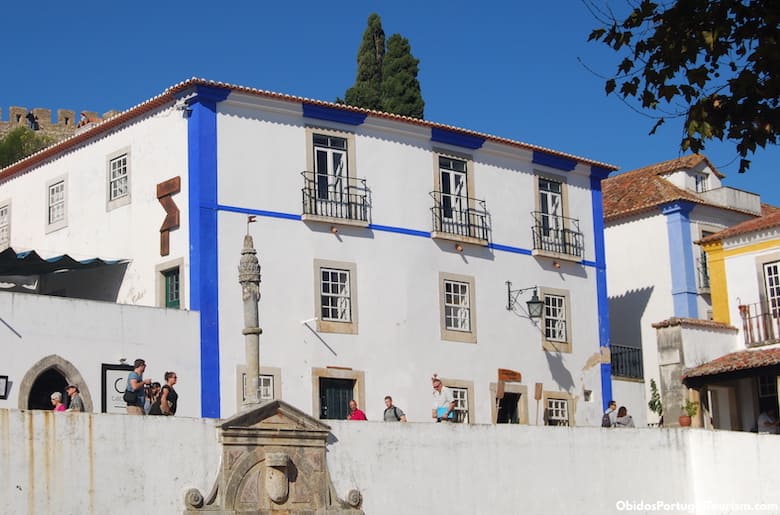 Below the pillory is a fountain from the 16th century

Obidos’ pillory stands in front of Santa Maria Church, and was built in granite in 1492. It was a gift from Queen Leonor, indicating Obidos’ municipal independence. It shows a shield with the royal coat of arms on one side, and a fishing net that Queen Leonor gave to the town in memory of her only son (who died in 1491 in a hunting accident by the Tagus River and whose body was brought to her by fishermen in a fishing net) on the other.
Below the pillory is a Mannerist water fountain, commissioned by Queen Catherine of Austria (wife of Portugal’s King João III) in 1575. It features two gargoyle-shaped spouts, a triangular basin, and the queen’s coat of arms, and provided Obidos’ drinking water, coming from the aqueduct seen outside the town walls.
Facing the pillory and the fountain, on one side of the square, is a portico that was once used as the town’s marketplace until the early 20th century.